Blessed with Suck Noblemen, Magicians, and the Obligation

The jig is up.

The cat is out of the bag.

The secret is out.

If you haven’t been keeping up with Galebound but intend to read it and don’t like spoilers, please go catch up before reading this article because wow this is going to spoil a lot.

Actually, even if you are caught up, there will be some minor spoilers in here (although nothing that hasn’t been hinted at), because you know what time it is?

It’s time to explain how magic (or rather, the Obligation) works in this cruel and windy world.

History of the Obligation

To talk about the relationship between Noblemen and Magicians, it might be best to first go over a brief history of how the Obligation cycle came to be.

The current year in Galebound is 1120 Anno Ventus–that is, years of the wind. As mentioned in a previous article, the Gale, as we know it now, is only 1120 years old (in Dusk years; 620 Earth years). Another storm did exist before, but it was simply a natural daemon and not nearly as entwined in the world’s magic as the current Gale. A millennia ago, the previous storm ceased and in its place arose the Gale and with it the Obligation.

In that time existed the person we know as the First King of Cymaria. Back then, magic did exist...sort of. Magic existed more as a religious concept in which people could ask daemons for favors and hope really hard that the daemon was in a generous mood. Some people were more successful than others. Close to the First King was one such person so skilled in entreating daemons it was rumored he was part daemon himself. When the old storm died and the Gale began, that man became the first Magician, and the First King the first Nobleman.

With the first Magician and the first Nobleman, the system of Obligation was born through which humans could reliably command and in turn be guided by the Daemons of their world. This system is maintained and enforced by the Gale, the ancestral daemon which carries the words and intent of Noblemen and Magicians and binds those within the cycle to their geasa. 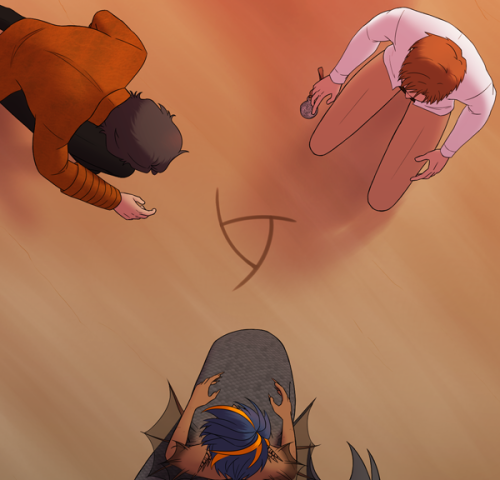 For centuries, Noblemen and Magicians worked together for the benefit of their countries and people. Daemons, both of the natural world and of the cities, moved the hearts of kings to command their Court Magicians as necessary. It was never perfect or even fair, but for the most part the system worked with some semblance of stability over the course of generations. 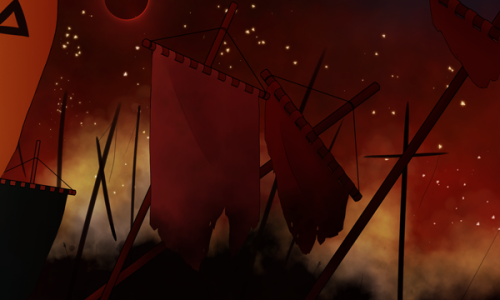 The War of the Blind Kings started in the year 438AV when the Magician Arcein, under the command of an Iridesan princess, murdered the last Iridesan queen Idoine Glafoncé. While six centuries of muddled history makes it unclear exactly how that assassination sparked the war, most agree that the queen was the first casualty.

Trivia: The Iridesan castle has been abandoned ever since because it’s considered to be haunted by the spirit of the murdered queen.

Shortly after, like flipping a switch, every other Noble house in the Dusk declared war on pretty much every other Noble house, meaning full scale battles between their Court Magicians. While there had been wars between countries and city-states before over land and resources before, this conflict was unique in that the participants seemingly lost all remorse for the damage inflicted. The war was named such (”of the Blind Kings”) for that reason: no matter how much damage they caused, the Noblemen behind the war didn’t care, as if they couldn’t even see it.

In truth, the balance of the system broke. Within that generation, and only for that generation, Daemons lost the ability to influence Noblemen. Every generation before and after was fine, but something went terribly wrong with Noblemen during that period, leading to the near decimation of both the Magician and Nobleman bloodlines. In the end, only thirty or so city-states remained with a monarchy intact (two of which were Evenheim and Cymaria), and even those remnants were left with only a fraction of the power and influence they had before.

Today, Cymaria is the last Nobleman-led monarchy, ruled by King Crawforde Galashiels Aster Cymaria. Technically Evenheim is still a monarchy, but after the previous king Matthias Renaud’s death and the disappearance of its crown-prince-now-technically-king Felix thirty-six years ago, the city-state functions as a guild oligarchy.

Point of trivia: The current monarch of a city-state or country takes on a second surname after the name of their domain (e.g. Crawforde Aster Cymaria or Felix Renaud Evenheim). Conan doesn’t get the Evenheim surname (yet) because he’s only the prince. The country-surname thing denotes that the ruler is, in a sense, married to their city and therefore they take on their city’s name as their own like one would with a spouse.

Second point of trivia since I mention surname adoption: It isn’t patrimonial in the Dusk. Instead, the spouse whose family has the higher social standing in the city in which they're married keeps their surname...traditionally anyway. If there’s no clear "winner", the couple may opt for a merged surname or just make up a new one (For example, if Din and Cornelius were to get married, traditionally they’d take Cornelius’s surname...until they realize that Cornelius Duvent rolls off the tongue much better than Din Rhode and they opt for a break from tradition. Conan would have taken on Lucie’s surname...at least, that’s what he assumed until the whole prince thing was revealed).

That’s the history that gets us to the conflict today, in which the king of Cymaria has ordered the death of Evenheim’s heir in an attempt to finally end a centuries-old rivalry between the two cities. Unfortunately, due to an intentional lack of specificity in the assassination command, the heir of Evenheim could either be Felix...or his son.

The Obligation, as the magic system is called, has certain rules that all parts bound by it must follow. The most predominant rule and basis of this system is... 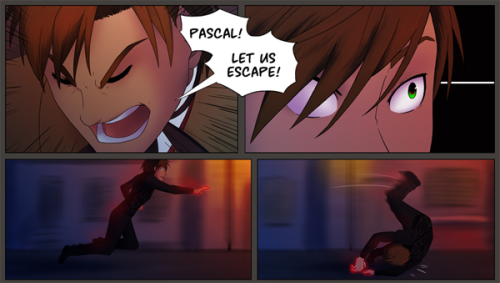 Noblemen command Magicians who command Daemons who influence Noblemen (there is indeed a power imbalance within this system).

Noblemen are descended from the First King, Éduin Aster Cymaria. They have the ability to command Magicians, but have no practical magical ability (i.e. you’ll never see one flinging fireballs). However, they can be influenced by daemons. The most useful application of this ability plays into their role as rulers: Noblemen can hear the quiet whispers of city daemons, as long as A) the daemon is powerful enough to make itself heard and B) the Nobleman was born within that city, tying their spirit to it (Incidentally this is why Conan was born in Evenheim instead of Norin; it was an intentional decision on the part of his parents. Y’know. Just in case).

Under certain conditions, a Nobleman gets special privileges with their city daemon if they’re a descendant of one of the city’s founders and if they’re the current true ruler of that city. King Crawforde and King Felix both get this access to their respective cities: Crawforde is a direct descendant of Éduin Aster and Felix is a descendant of Evenheim’s founder, Evangeline Aster, a Cymarian princess who settled a city of her own across the Altirian Ocean. This special connection to the city daemon is usually passed on to the firstborn of the king (regardless of gender), although it can be passed to a close relative if need be. If Felix were to die, Conan would inherit kingship over Evenheim and get full access to its city daemon (and take on the full name Conan Matthias Renaud Evenheim).

This set of conditions acts as something like a tiebreaker in inter-city squabbles between Noblemen. If two Noblemen live in the same city and decide to pick a fight with one another, the city daemon will side with the ruler of the city and warn them that the other may attack.

For the most part, however, the influence Daemons have over Noblemen is meant to guide them so they can appropriately command Magicians to use magic, or to work for the benefit of the cities they rule. City daemons give Noblemen access to the heartbeat of their city, and wild daemons influence Noblemen to prevent excessive harm to the natural world for the benefit of life within the Dusk.

...or that influence can be used against Noblemen when nature decides they’re probably better off dead.

There’s a reason Conan fell for this so readily.

Magicians are descendants of the first Magician, Alain Duvent (yes, Din has a rather prestigious lineage). Their place in the Obligation gives them the power to command Daemons, which manifests as magic. However, the Obligation binds them: when given a command by a Noblemen, a Magician must obey.

There are three classes of magic which a Magician might employ: Conjuration (fireball throwing, etc.), Enchantment (the creation of wrought daemons within objects to imbue the object with certain effects or properties), and Law (the binding of one’s self).

The third magic, Law, has a bit of duality to it. For one, Magicians can literally magick themselves, forcing their own bodies to violate natural physiology. For instance, a Magician could use magic to accelerate their healing process, or change their appearance, or...well, use your imagination here. However, the other aspect of Law is what enforces a Nobleman’s command: Laws bind a Magician’s body and soul (but perhaps not their mind) towards following a given command.

To give you an idea of what this feels like, go stand facing a wall. Try walking through it. Do you feel your brain rebelling at the idea? "Um. No? I can’t walk through walls. What do I look like, Susan Sto Helit?" Multiply that resistance by a thousand: that’s the pull of Obligation and Law. It classifies anything that violates the command as an impossible task.

Lastly, no magic can be worked except for the purposes of completing or abiding by a Nobleman’s command. The strongest magic comes from a command requesting a specific action and a Magician willing to complete that command according to the Nobleman’s words. Alternatively, a Magician not willing to complete an open-ended or vague command would be relatively ineffective at casting magic (although they would still need to follow the command). Basically, if a Nobleman and Magician have the same goal and actually work together, their magic can be awesome.

The Gale is the carrier of this system. Noblemen, by verbally speaking a command, engrave their words onto the Gale which binds Magicians by those words. Magicians, through their aura, encode their intent upon the Gale, which binds Daemons.

Through this cycle, magic keeps some semblance of balance within this world, although at the expense of Magicians’ free will. This is a cruel and broken cycle, one that our heroes will need to figure out how to resolve without making everything even worse...or they might opt to make everything worse. Who knows. Hard to tell with those two sometimes.

But as a Nobleman and a Magician within the cycle of Obligation, the magical system enforced by the storm known as the Gale, Conan and Din are Galebound.

One last point of trivia: It’s a damn good thing radios haven’t been invented yet, because yes: commands work over radio waves. In short, they better get this nonsense figured out before things get really bad.